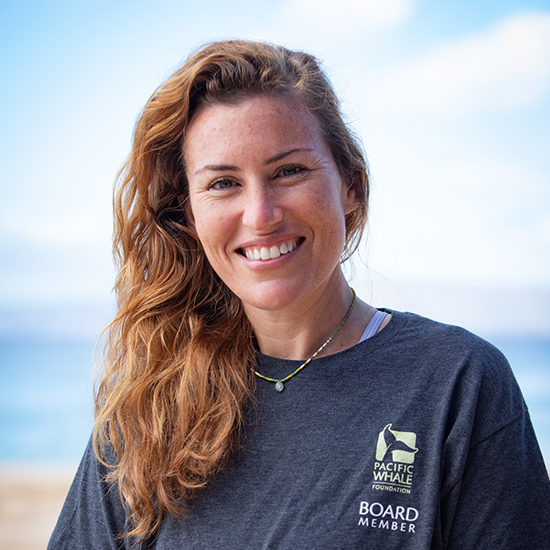 A 2020 addition to the Pacific Whale Foundation (PWF) Board of Directors, Jennifer E. Childs has spent her entire career to date focused on nonprofits. With her sights now set on PWF, she brings considerable talents and skills to the table, from volunteer management and nonprofit board experience to fundraising and development, philanthropic connections and access to conservation networks.

Settling in Haiku, Maui, approximately three years ago, Jennifer believes that current threats to the ocean and its inhabitants are the most urgent and pressing issues facing the planet. Through her expertise in multiple areas, she hopes to provide resources and guidance to ensure PWF’s ongoing success as a global leader in marine conservation.

“Thinking about ways to help the organization grow and build strong partnerships with individuals and other foundations, both on Maui and beyond, is very important to me,” she explains. “From a global perspective, I want to help support the organization’s long-term vision.”

Jennifer believes that PWF’s work is an important reflection on the health of the ocean. She’s particularly concerned about the effects of ocean acidification and microplastics on marine ecosystems and wildlife. “For me, ocean health should be one of the highest priorities and areas of concern for humanity. It’s a real passion of mine to support organizations that are thinking about the environment, about human impact and the legacy we’re leaving,” she affirms. “I want future generations to look out on bodies of water and know that they’re alive and thriving, and I want to do my part to make that happen.”

Her connection to whales, however, began long before she moved to Maui. As a small child, her primary caregiver would play whale songs to help lull her to sleep. “Whenever I hear whale songs, it touches a deep chord and really tugs at my heartstrings,” she says. “The memory is so sweet. It created a bridge into this world and built a relationship with the ocean’s rhythm of life.”

Although Jennifer grew up in Houston, one side of her family hails from an island off Canada’s east coast, which helped forge a strong connection to the ocean. “When I look out on the water, it’s so full of magic,” she relates. “Every element that weaves it all together, contributing to the full ecosystem, is incredibly precious.”

She considers marine mammals such as whales and dolphins as the majestic apex of marine life and heralds their value as ocean representatives to which people can emotionally relate. “If we can share stories about them and the impact of our actions, that has the power to benefit the entire ecosystem,” she explains.

Jennifer’s favorite marine animal, however, is the narwhal. “It’s such an absurd animal, seemingly having come from some mystical place,” she says. “For me, they reflect the magic of the ocean. It’s so rich, filled with abundant life, and we have so much still to learn. But if you can have a unicorn whale, then anything is possible.”