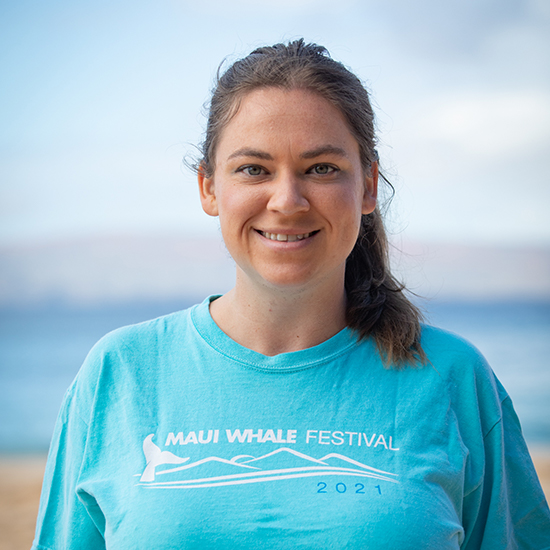 As a CPA and vice-president of financial accounting and technical reporting for a Mainland real estate company, Courtney Hathaway loves numbers. A whiz at financial analysis, accounting, auditing, compliance and governance, she joined Pacific Whale Foundation (PWF) Board of Directors in early 2020 to offer her skills as treasurer. Her distinctive talent in financial analysis has been invaluable in making sound decisions that benefit the organization.

A self-described finance nerd and animal lover, Courtney is extremely passionate about the PWF mission and protecting the planet as a whole. She and her husband lived in Kihei for three years prior to moving back to the Mainland in 2021.

“When we first moved here, we looked for volunteer opportunities related to animals and conservation,” she recalls. “It was right at the beginning of whale season. Although it seems strange to say this now, I didn’t realize at the time how important the whales and whale season are to Maui culture and the experience of living here.”

Residing in a Kihei condo a block and a half from the beach, Courtney was amazed that she could see whales jumping in the ocean as she sat on the shore. “I didn’t know that would be such a major part of my life when I moved here,” she says. “But to be able to sit on the beach and see these amazing animals out there — it’s insane!”

It wasn’t long before Courtney and her husband were going on whale-watch tours. After volunteering with PWF for a brief time, she learned that the nonprofit was looking for a Board treasurer. “I thought, ‘Now, that I can do!’”

Joining the Board has been very rewarding, she reflects. “Environmental stewardship and conservation are topics that have become increasingly important to me,” Courtney explains. “I’ve become really concerned with what’s happening to the Earth. It’s a fundamental problem that we need to deal with. I think a lot of times people see it as something intangible, but it’s in our best interest because we live here. We see already how the ocean is impacted and how that is impacting us as humans in addition to the animals. We need to halt and try to undo some of the damage that’s already been done.”

One of her greatest areas of concern is marine debris — everything we’re putting into the ocean that doesn’t belong there. “I’m a person who enjoys convenience and convenient things, so I understand why single-use plastic is so popular,” she admits. “But when you realize that the plastic never goes away, that it just gets smaller and smaller until we have an ocean full of microplastics, you have to take action. We have enormous islands of floating garbage, oil spills and more. Something needs to be done.”

As a devout zoophilist, Courtney loves all the beings that inhabit the planet. If she had to single one out, she points to the humpback whale as her favorite. “They’re so big and graceful, plus really sweet and smart,” she says. “I have always been drawn to sea creatures in particular. They’re kind of mysterious, because you don’t see them all the time. But when you snorkel or scuba dive, you become aware of just how much there is under the surface. I am very passionate about protecting that.”