When the research team carries out odontocete transects, we are looking for all species of toothed whales, but most commonly we see bottlenose, spotted and spinner dolphins. On rare occasions we see false killer whales, of which the insular Hawaiian population is on the endangered species list, and short-finned pilot whales, which is a deeper water species not commonly found in the shallower waters of our survey area. We might see these two species a handful of days per year. Well, believe it or not, we were recently lucky enough to see them both on the same day!

We were surveying the area behind the island of Lana‘i and we had a feeling it was going to be a special day when we set off from Ma‘alaea Harbor. We had just arrived at the start of our first transect line when we saw a large black dorsal fin. We soon realized that this was a false killer whale. At first we only saw one solitary individual, but it soon swam and joined the rest of its pod, which we estimated at 15 individuals. We photographed them to obtain ID’s for our false killer whale catalog and collected behavioral data. When we were satisfied that we had photographed all the individuals present we returned to our transect line, excited that we had such an exciting experience so early in the day.

Less than 30 minutes later we spotted another dorsal fin, only this one was much larger than the other species. Could it be? A quick confirmation with binoculars told us that, yes, we had a pod of short-finned pilot whales right in front of us. The pod was milling at the surface and spyhopping to check us out. Once again we photographed them for our photo-ID catalog and collected behavioral data as per our protocol. This time we stayed the maximum 60 minutes, and then we had to leave and return to complete the transect line.

Later that month we cataloged the photographs taken that day and realized that not one of the pilot whales photographed that day was a match to our catalog.  This most likely means that this pod was an entirely new sighting for us; we have never photographed them before. We added 22 new individuals to our catalog; 0 were re-sights. Of the false killer whales photographed, 10 were new individuals to our catalog and 3 were re-sights.
It was really a very special day for all of us on board the Ocean Protector. We consider ourselves very lucky if we see one of these species and to see them both in a single day was so amazing.
Here is a map to show you where the research department has sighted these two species over the past few years: 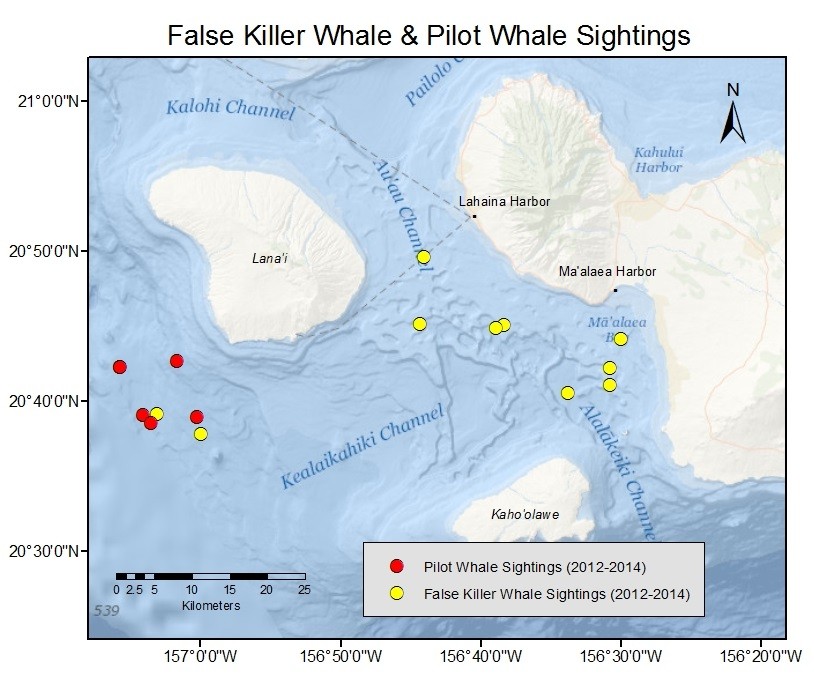