← Click here to return to Blog Back to Blog

A response to “Shark Week”

Who’s heard the adage, “Live every week like it’s Shark Week”? Though Discovery Channel’s TV extravaganza has come and gone, the repercussions from this wildly popular special are still echoing here on Maui, especially after the airing of a program named Sharkageddon that focuses on recent shark attacks in Hawai’i.

Though we also get excited when seeing footage of big, toothy, graceful elasmobranchs, some of the opinions presented as “facts” in Sharkageddon are truly troubling to us here at Pacific Whale Foundation. This program discussed the perceived spike in shark attacks in 2013 in Hawaii and attempts to explain why this occurred. Unfortunately, in the excitement to create a show full of ominous music and cliffhanging moments, the producers may have run out of time to fact check some of their findings. Though I am not currently involved in any specific shark research, as a marine scientist and steward of the marine environment, I felt the need to address some of the “findings” from Sharkageddon and explain why it might not be time to be scared out of the water just yet.

ALL shark attacked are recorded
First off, the Sharkageddon program emphasizes the amount of shark attacks in 2013, which was unusual. However, they go on to state that provoked attacks are never reported, chillingly adding that “there’s more shark attacks than we ever knew”. This is simply untrue, as Hawaii’s DLNR keeps track of both unprovoked and provoked attacks. A provoked attack, by the way, is  defined by the International Shark Attack File as occurring “when a human initiates physical contact with a shark, e.g. a diver bit after grabbing a shark, a fisher bit while removing a shark from a net, and attacks on spearfishers and those feeding sharks.”
Protections on sea turtles are not the problem! 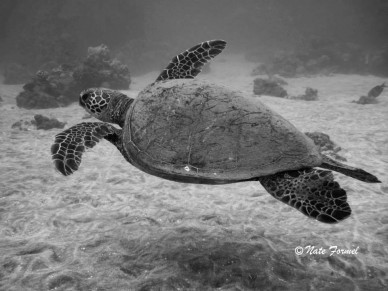 Secondly, the program tries to place blame on the recovering population of Hawaiian green sea turtles as a motivator in increased tiger shark attacks on people. Though it is true that sea turtles are protected throughout the United States under the Endangered Species Act, this protection was implemented in 1978 and since then, Hawaiian green sea turtle numbers have increased steadily. If there was a connection between tiger shark attacks and the recovering population of green sea turtles, it would be expected that tiger shark attacks would have increased steadily during this time period as well. Instead, we only see a spike during the years 2012 and 2013. Simply put, the recovery of this species once in danger of extinction is not at fault for “drawing in” more tiger sharks—and this dangerous notion could threaten to derail much of the good that the ESA and conservation efforts have done in protecting sea turtles. Give sea turtles a break- they only make up a small percentage of this highly omnivorous sharks’ diet anyways!
Sharks are not being “drawn in” to Ma’alaea Harbor from Kaho’olawe!
Lastly, as an organization that provides educational eco-cruises in Maui, this “fact” presented in Sharkageddon hit particularly close to home to us at PWF. The program stated as a matter of course, that sharks are drawn in to Maui from Kaho’olawe (which the show pronounced incorrectly by the way- sheesh!) because boats dump leftovers from dinner cruises into the harbor. Ma’alaea Harbor is actually one of the “greenest” harbors in Hawaii- providing pump out stations for sewage as a better alternative to dumping offshore and readily accessible dumpsters for boats in slips. From our organization’s point of view, we can personally attest to our boats’ waste management practices of donating our leftover food from eco-cruises to a local pig farmer, and for the rest of our refuse, we recycle what we can and deposit garbage in a dumpster. To our knowledge, no other boats in Ma’alaea dump leftover food in the harbor; it just wouldn’t make sense with dumpsters right on the docks, and the Coast Guard station right there. It’s against the law- the Marine Plastic Pollution Research and Control Act , enforced by the Coast Guard, forbids discharging waste, including food scraps, into U.S. waters.
Now, I could go on with inaccuracies within the Sharkageddon show, but instead I would like to leave you with this thought- remember that we are more dangerous to sharks than they are to us. It’s currently estimated that over 100 million sharks are killed a year by humans- as accidental bycatch, as victims of shark finning, and as targets of shark fisheries. We don’t need to add fear mongering as a threat stacked against these beautiful, essential ocean creatures. Indeed, Sharkageddon did hastily wrap up their show with a conservation message as well- coupled with a little more research on facts in the future, this will help to turn the tide in favor of these apex predators in the ocean.
Save
Save